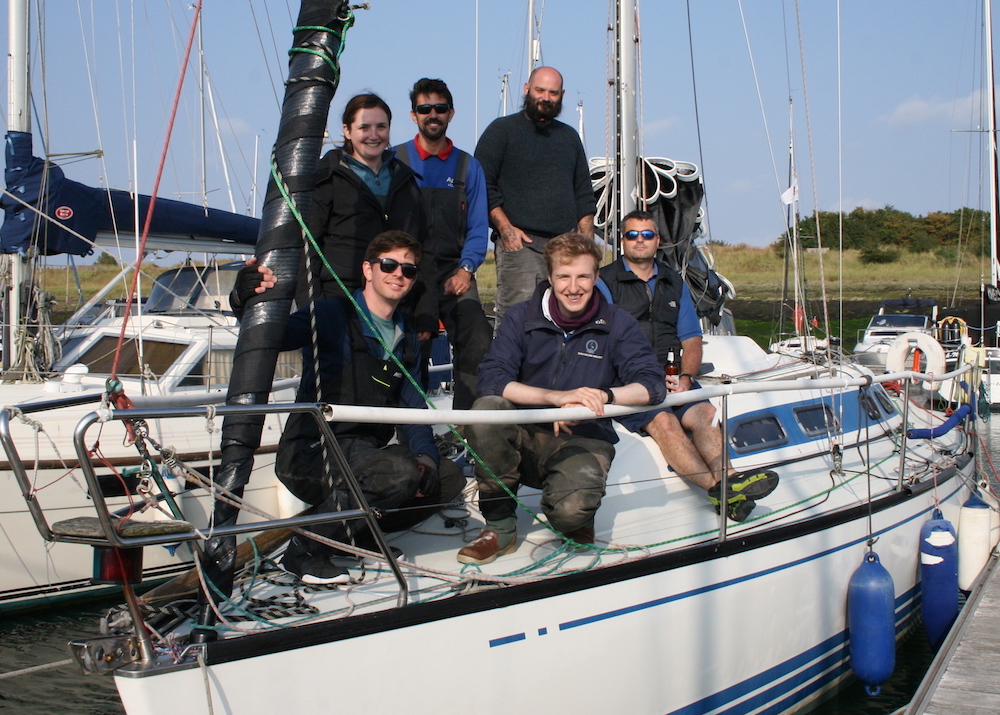 Winners of the Town Cup and the EAORA Houghton Cup – Robert Leggett and team on ApeX, an X332 – photo Sue Pelling

Robert Leggett and team on ApeX, an X332, have won the Town Cup to mark the end of Burnham Week 2021.

The northerly breeze that remained throughout the week, shifted slight further round to the east today to allow for some good beats and runs. And, with windspeeds averaging around 12-15kts, there was plenty of tactical racing, and extremely close finishes in many classes.

As he arrived back in the marina after a long day on the water, Leggett – owner and skipper of the Town Cup winner ApeX – said the team is absolutely delighted. “We are so happy to have won this most prestigious trophy. We raced hard and had a fantastic day. We sailed the boat round from Haven Ports specifically for the Town Cup and also the EAORA Houghton Cup, which we were competing against Oystercatcher to win overall, so as well as the Town Cup we are double delighted to have clinched the Houghton Cup too.

Chatting about the race, Leggett added: “Actually our start was not fantastic, I got that slightly wrong so we had to make quite a recovery up the first beat, which was difficult weaving our way through some of the slower boats. The run back was quite tactical in terms of avoiding the shallows but the crew worked hard throughout and we managed to increase our gap over Secrets, which ultimately won us the race.”

Richard Matthews’ flashy, new Carkeek CF520 52ft Oystercatcher XXXV that was launched earlier this year, powered around the 29nm course with ease and not surprising took line honours in just over three hours 42 minutes. It was not to be her day however, and on corrected time Matthews and team had to settle for eighth place. 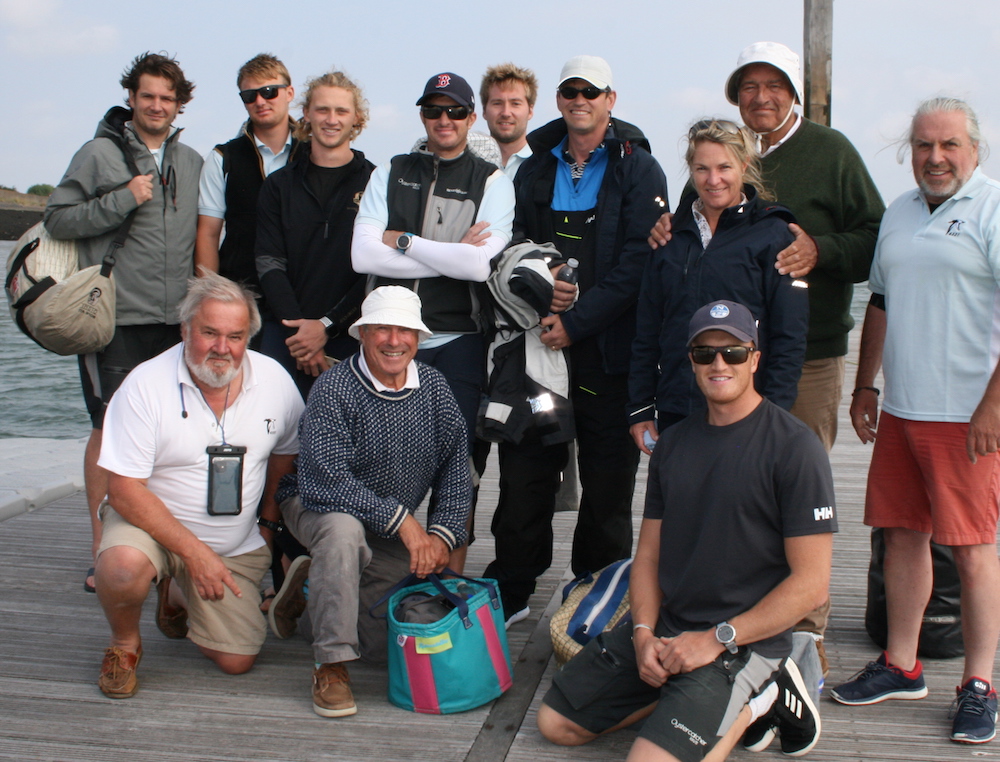 Matthews said it was enjoyable nevertheless: “It was a very nice course and empathetic for our 3.7m draft but happily the tide was up so it was the dream race for us. We saw about 17kts of wind so hoisted the heavy jib for the second beat but regretted it so changed back to medium for the last beat. It was a great day on the water and we are now looking forward to the final EAORA race – the Buckley Goblets.”

Elsewhere on the River Crouch, the remaining fleets contesting Trophy Day enjoyed what turned out to be a spectacular finale to Burnham Week 2021. A good working breeze gave plenty of opportunities to put tactical skills to the ultimate test among many of the other classes.

A fine example of close racing was demonstrated in the Dragon class with five boats finishing within 15 seconds of each other. Ian Gray sailing with Rene Nel and Alex Burnett on Still Crazy put in excellent performance and were able to take the Daily Telegraph Cup by the slimmest of margins. 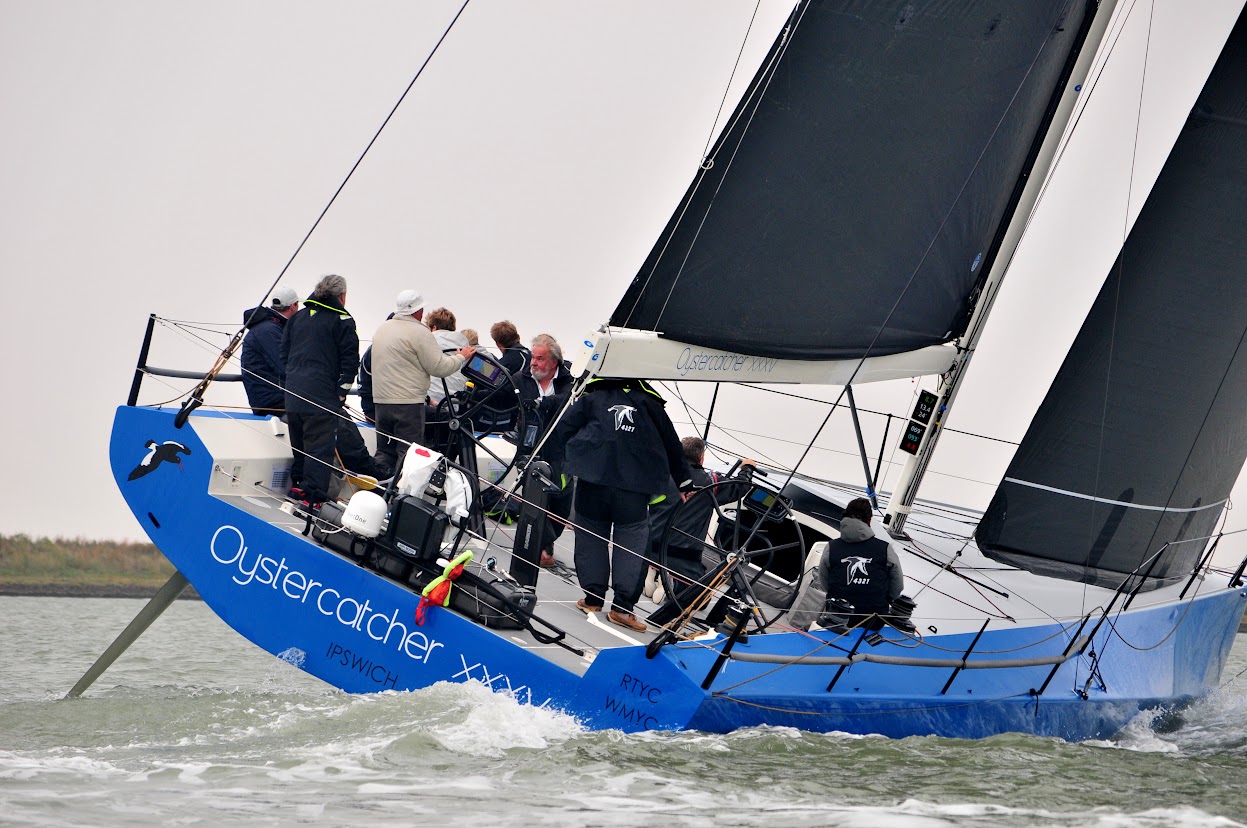 Commenting on his win, Gray said: “Amazing. We narrowly won with a three inch gap between us and the second boat sailed by Chippy Cole.” Commenting on how they all found themselves in the predicament, Gray added: “We had a great race to the Outer Crouch but on the way back up river, we piled up in a group and had seven-mile, place-swapping battle on the run back to the finish line. It was a truly fantastic race and will be remembered for many years to come I expect.” 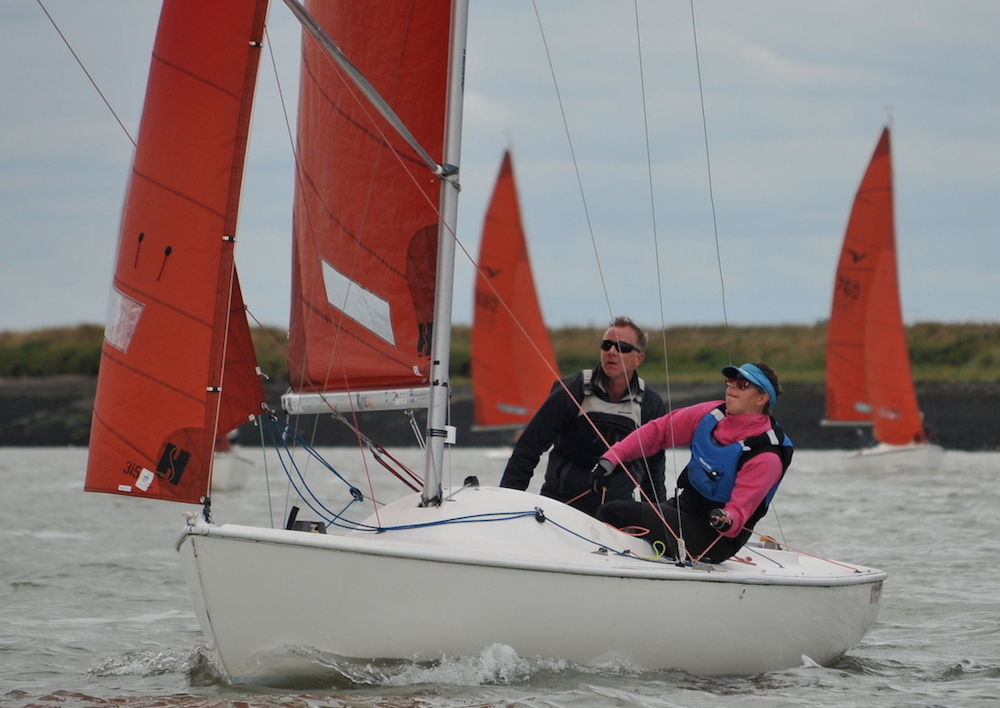 Alex Porteous who crews for Micky Wright in Spoof said: “This week has put our tactical skills to the test. We really did enjoy fantastic, competitive racing. We had some good downwind speed but generally our success was all about the challenge of being pushed exceptionally hard, all the time by really good sailors. There was certainly no time to relax at all because there was always someone there ready to pounce. Today was fine example of that.”

The local one-designs, the Royal Burnham and Royal Corinthian One-Designs also continued to enjoy close racing today with Justin Waples and his team of Steve and Lizzie Rands rounding off an excellent week by scoring another first to add to their already impressive wins last weekend and Mid Week. Waples who took home the Bar YC Trophy today said: “The week has been a huge amount of fun. We sail a lot together so I think I put our success down to teamwork. Also we’ve just finished Aldeburgh Week so we were race sharp, which really did help.” 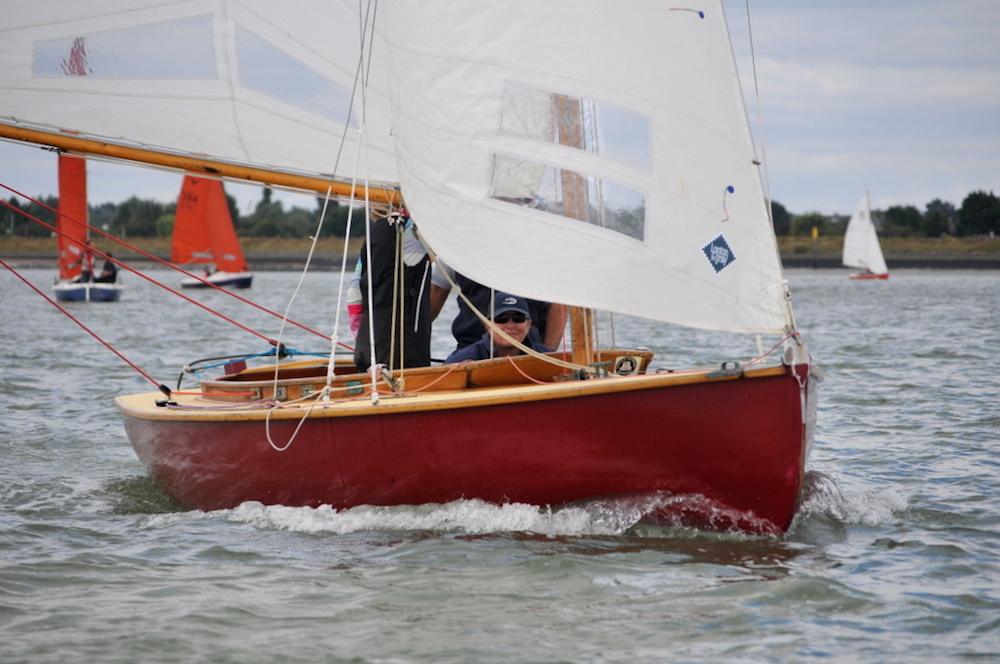 In the Royal Burnham One-Design class Simon Hollington and team in Beryl sailed an exceptionally good final race and won the Lards Cup with a huge two-minute lead from Will Dallimore and team in Manderin.

Last but not least mention should be made of the infamous Burnham Week Duck Race that took place off the Royal Burnham YC pontoon earlier today. Over £800 was raised for the Essex Air Ambulance. 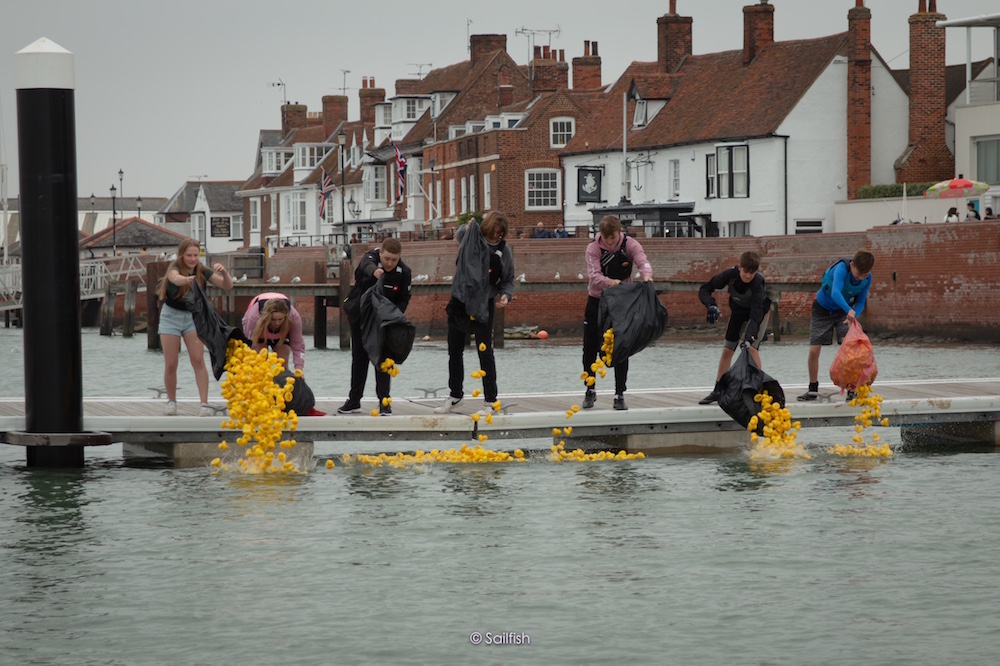 The Duck Race in aid of the Essex Air Ambulance was, as always, a huge success – photo Tammy Fisher

Milly Drew (17) Commodore of the Corinthian Otters who performed the official start of the race with her Flag Officers said: “It was a real honour to set the ducks off on their race, and I am grateful to everyone who generously sponsored a duck. We were pleased to be able to do as much as possible for the Air Ambulance particularly as there was no race last year. Everyone who lives in Burnham knows how important the Essex Air Ambulance is because getting to the hospital by road could be slow and uncomfortable.”

Following the grand Burnham Week prizegiving where Trophies for the Mid Week series and the final day’s racing were presented, competitors joined locals and visitors to celebrate the end of Burnham Week 2021. A grand fireworks display and the traditional winners’ parade of the Town Cup around town delivered a fitting finale to this classic east coast regatta.

In his summing up of the week Edwin Buckley – Principal Race Officer – said: “It was a tough week in terms of course setting with the persistent northerly making it difficult to establish beats and runs. However, it was one of the most competitive events I have been involved in for some years and I think everyone will agree with me that being able to open the doors of Burnham Week once again after a tough year of restrictions was just the sort of tonic we all needed. We had one of the best turnouts for many years, and it was a delight to see so many young sailors competing. We are very much looking forward to welcoming everyone back again next year… same time, same place.”

For a full list of results go to http://www.burnhamweek.com.