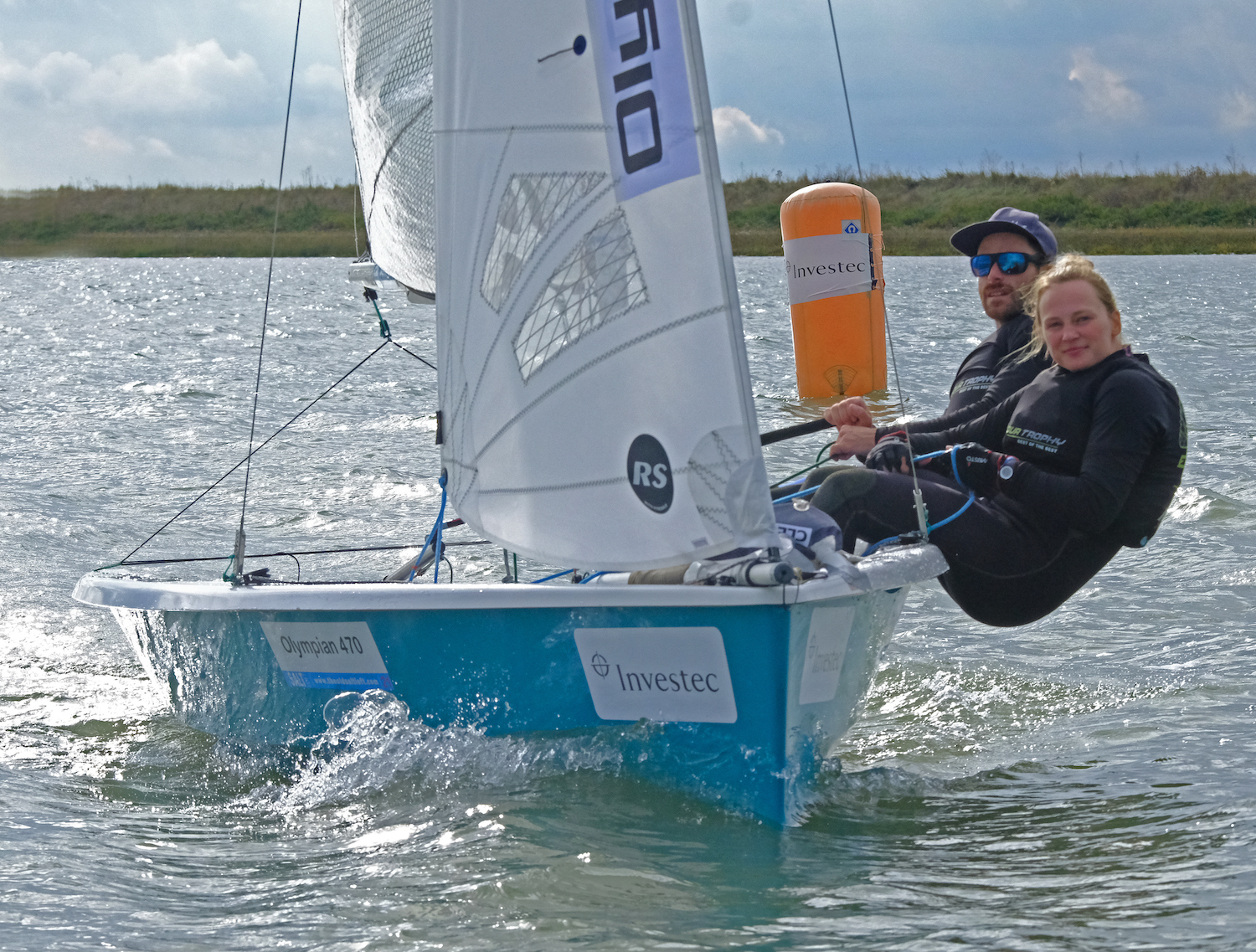 After a couple of mixed results on the opening day yesterday, including an OCS, silver medallist Luke Patience and Mary Henderson won the Endeavour Champion of Champions title with two final race wins.

Following a three-hour postponement waiting for the breeze to fill in, the 31-strong fleet enjoyed the two final races of the Investec-sponsored Endeavour Trophy. An 8-9kt northerly breeze was just enough to allow for a decent windward/leeward course but the strong Spring tide was, once again, the dominating factor, that kept competitors on their toes right to very end.

Winning the start was everything today, which was clearly demonstrated by Patience and Henderson, particularly in the first race. It was imperative to take an immediate hitch over to the right-hand side of the course out of the tide. For Patience/Henderson once they were in control after a couple of perfect tacks, they were able to take advantage of the clear air and score their first win of the day, with Tom Morris and Guy Fillmore (RS800) in second place. Their nearest rivals – Ben Palmer and Amy Seabright (Thames A Rater) – finished a close third. 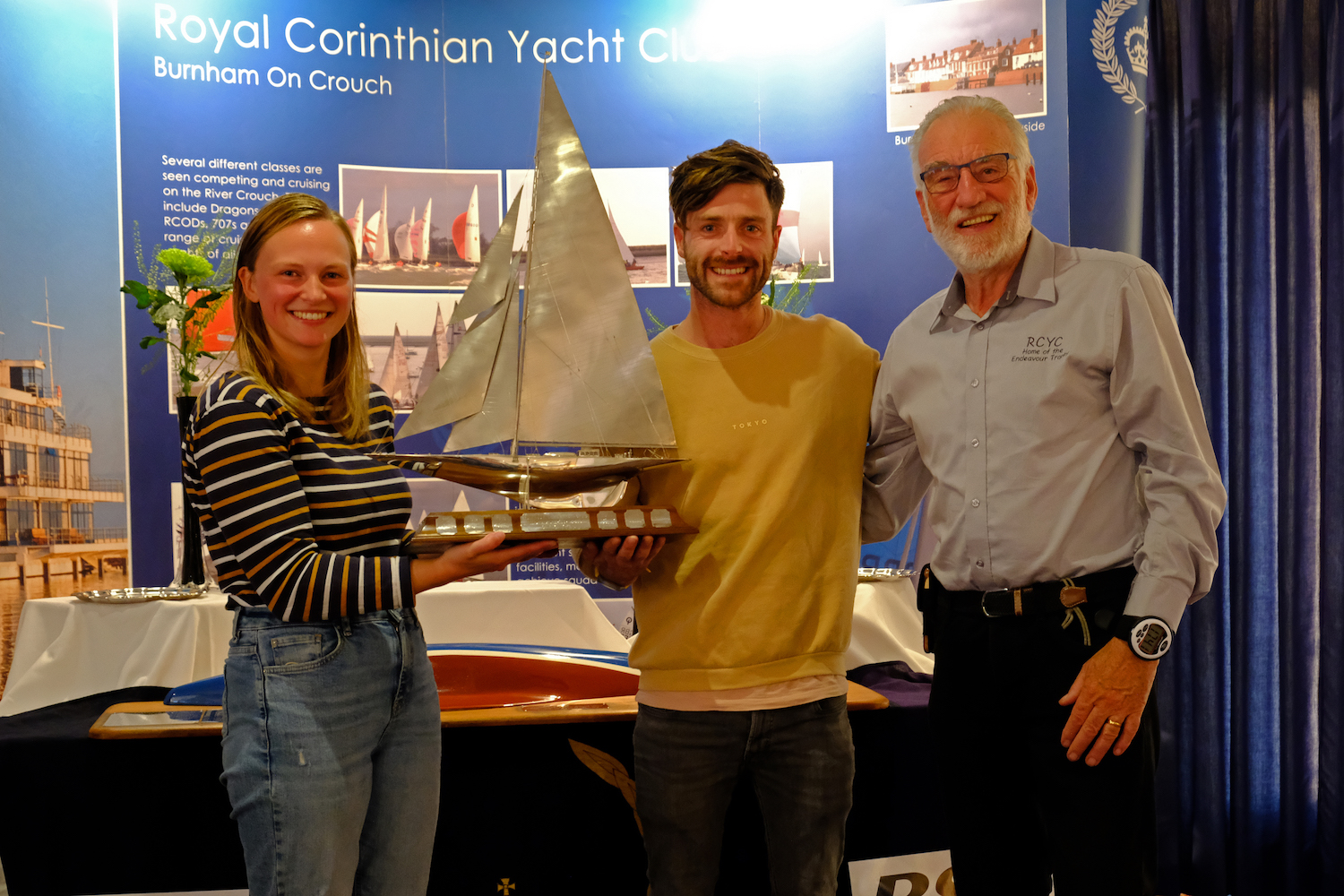 With three points between the top two boats (Patience/Henderson and Palmer/Seabright) going into the second and final race of the day, the pressure was on. A bit of a battle took place off the start line but once again Patience/Henderson were able to repeat their performance and secure another win, which was enough for an overall win. Palmer/Seabright were always in contention but they had to settle for a close second, which after their impressive results from the opening day, were able to take second place overall.

For Patience and Henderson winning the 2021 Endeavour Trophy was a case of completing some unfinished business from the last Endeavour in 2019. Patience recalls it well: “Indeed, it almost feels like a bit of redemption from when we almost won two years ago but mucked up on a gybe on the last run.

“In a way it makes it even more special to have finally won the Endeavour. It was really great racing.” 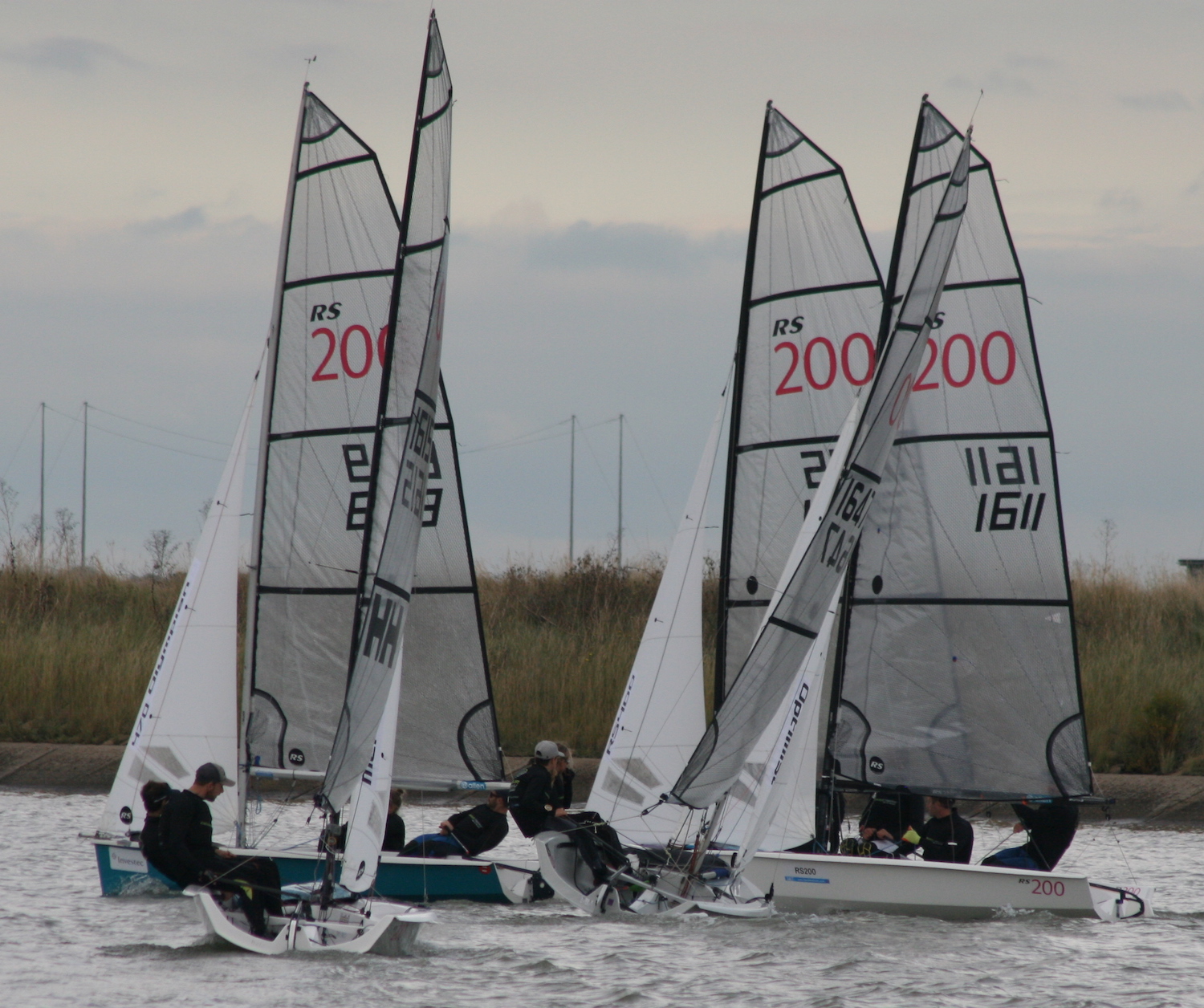 Commenting on today’s game plan, Patience added: “In both races we managed to get free of the fray early and that was very important today. We spent a lot of time before the racing chatting about our options and did a ton of transits on the line before the start so we could be accurate enough to get on port early.”

A delighted Henderson added: “Winning the Endeavour is a real life achievement and to become the champion of champions, helm or crew, is very special. Also, my dad [Will Henderson] will be delighted because this is his 21-year-old boat!”

Second placed Palmer said: “It feels great to have finished second in the Endeavour Trophy. Amy and I haven’t sailed together for several years, so I was a bit nervous about how we would perform but it all came together and we surprised ourselves. It was also great to sail against such a competitive fleet and have a good race at the top with the likes of Luke Patience because he doesn’t make mistakes.”

Although Nick Craig – five time previous Endeavour winner – is not known for particularly enjoying light airs, he admits that this weekend, where the wind hardly reached 10kts, he surprised himself. He and Katie Burridge sailed well and with four fourth places to count, they found themselves in a respectable third place overall. Craig said: “Regardless of the conditions, the Endeavour never fails to produce top class racing. I was pleasantly surprised how well we did in the extremely light airs yesterday and I definitely feel it was as well as we could have hoped for.”

Arran Holman and Toby Lewis (RS200) weren’t as on form as they had hoped for this weekend but nevertheless notched up a string of consistent results, which left them in fourth place overall, just four points behind Craig/Burridge.

Holman said although he had crewed the Endeavour a few times before this was his first time helming at the Endeavour. “It was a great experience. Also, having Toby [Lewis] as crew – a legend of the event – I couldn’t have had a better guy at the front dragging me round the course at times, telling me where to go. Overall though, the Endeavour has a fantastic atmosphere and it is so great to have so many awesome sailors and legends of the sport all together pushing really hard.”

A final mention must be made of the highest place junior sailors (RS Feva) – Millie Irish (17) and Joe Warwicker (16). As well as winning yesterday’s final race, they sailed impressively once again and finished the day with a fifth place, which left them in a respectable seventh place overall.

Irish said they were delighted to get another chance to race today: “At the start of the day, with no wind, we didn’t think we’d get another chance, so we were so pleased the wind finally filled in. We have learned so much this weekend. The biggest lesson was realising just how much even the tiniest mistake can cost you because everyone is so good.”

Back on shore after racing this afternoon, competitors and guests attended the 60th Endeavour prizegiving where the winners were presented with the spectacular solid silver model, and the half model of the America’s Cup J-Class yacht Endeavour.

Plans are already underway for next year’s Investec-sponsored Endeavour Trophy, which is taking place on 8-9 October 2022.