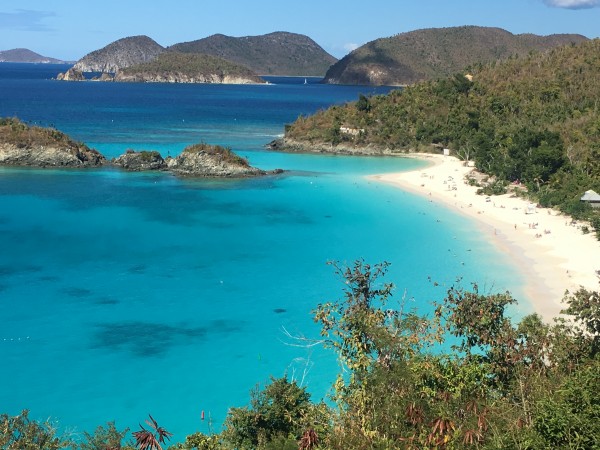 The full beauty of the US Virgin Islands – photo Sue Pelling

Those fortunate enough to be based in the US Virgin Islands in the vicinity of St Thomas, St Croix or St John at the end of March, would doubtless have noticed the amount of island activity created by the St Thomas International Regatta (STIR).

Living up to its glowing reputation as the ‘crown jewel’ of Caribbean racing, this four-day event (Round the Rocks Race, and race series) hosted by St Thomas Yacht Club, attracted a healthy fleet of 50 international race teams. Representing a variety of classes from beach cats to out-and-out 70ft race boats, the competition was red hot throughout, and there was never any shortage of spectacular sailing conditions, and fine Caribbean hospitality. Organisers and those who took part were also grateful for the generous sponsorship that included the USVI Department of Tourism, Margaritaville Vacation Club, The Moorings, Marlow, K3 Bags, The West Indies Company Budget Marine, and Presidente Beers.

Now in its 46th year, and the second time it has taken place since Irma and Maria – two category 5 hurricanes – swept through Caribbean more than 18 months ago, it is remarkable how locals and organisers passionate about the event have pulled together to produce another hugely successful Caribbean regatta. While still officially in recovery mode, with huge amounts of work remaining in many parts of St Thomas, St Croix and St John, there is no doubt that these islands are beginning to return to some sort of normality.

For St Thomas YC, based in the south-east corner of the island in Cowpet Bay, the largest issue created by the hurricanes was the devastation of the dock area but according to Margo Lynch, Commodore and Regatta Director, things are about to change: “We are very excited to announce we have finally signed the contract to have our docks rebuilt. There has been so much re-building following the devastation in the area and, the reality is, because this is a smaller job it has been a struggle to get it accomplished.”

Another positive spin on the recent traumatic events is the re-birth of the IC24 fleet. Having lost six of the club’s nine boats, the future of the class racing at the club looked fairly bleak in 2017, but thanks to local sailor Dave Franzell and team, who masterminded a plan to have them restored, the club is now in the enviable position of being home to the largest one-design fleet in the Caribbean. 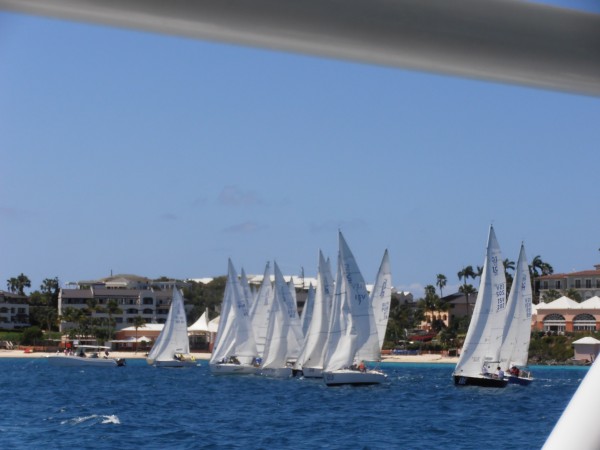 With 18 boats on the water this year, the IC24 was the most competitive fleet, so not surprisingly racing went down to the wire after the 12-race series.

Fraito Lugo, one of the many super-hot IC24 sailors from Puerto Rico had a mixed bag of results at the start of the series but he and his team on Orion, which included his 16-year-old son, Alejandro, and 11-year-old daughter, Alejandra, sailed well and were able to take the upper hand from fellow Puerto Rican Ramón Gonzalez Bennazar on Sembrador. Going into the final race, Gonzalez Bennazar, who led throughout the series was just two points ahead but had a poor start and was unable to recover leaving Lugo and team on Orion to scoop the top prize.

Commenting on his win, Lugo said: “We are very happy to win such a competitive class. I think I put it down to experience. We didn’t sail so well the first few days but we gradually got better.”

Commenting on the regatta and why he always makes an effort to attend, Lugo added: “Always top class competition, and there is no better place in the Caribbean to sail.”

One thing you can generally be sure of at this regatta is the consistency of the prevailing easterly trade winds that range between 15-18kts. It does however, have a tendency to blow a bit harder at times and for the grand finale on the closing day a big squall with winds up to 35kts made an appearance and caught out a few.

One victim of the squall was Australian Nathan Ellis on Peter Corr’s King 40, Blitz – the overall winner of CSA Spinnaker Racing 1 – who went overboard in a wipeout during a gybe. This 10-strong international team that clinched the overall series win after a tie-break (calculated using the greater number of first places) over Pamala Baldwin’s J/122, Liquid from Antigua, not only won the series but also its class in the Round the Rocks Race – an independent race that took place the day before the regatta.

Ellis commented: “We had to gybe to avoid an island during the squall and we had a bit of trouble pulling the spinnaker through. In all the confusion one of the lifelines broke and I took a bit of a dip. Thankfully the team circled round, and hauled me in smartly so all was fine, apart from losing a bit of time.”

Commenting on what he believes is the key to his team’s success a delighted Corr (owner and helmsman) said: “It is all down to having a well-trimmed boat at all times, practice and good teamwork. We also find it good to switch helmsman intermittently particularly during a rough race because it keeps concentration fresh so you can focus on the numbers.”

In CSA Spinnaker Racing 2 it was the young team from St Croix on the J/100 Bad Girl who stole the show. Most onboard were friends from high school so the vibe was good and having knowledge about the area, according to Bryan, was paramount. “It is very important to remember there is a lot of current in St Thomas so you need to do your homework, and talk to the locals to find out more.”

Touch2Play, a Reflex 38 owned Rob Butler, was the only team to take a clean sweep of first places. Although the majority of the team was from Canada it was Meagan Hislop from St Croix who steered the boat to success. Commenting on the regatta she said: “It is important to remember you can win or lose this regatta over a matter of seconds, so you have to stay on it every moment of the day

“Overall this is a phenomenal regatta both for the serious racing and for the fun you have at the club. It is a beautiful location, it is challenging racing, and it is a good friendly group of people to be racing against.”

Tristan Ewald, aboard the Nacra 18 Infusion taking a class win in the Beach Cats, while Niall Bartlett cleaned up in the nine-strong Hobie Wave class.

With plans already in place for the 2020 event including the construction of a new mooring dock, now is the time to prepare to take on the 47th anniversary STIR challenge that includes the recently formulated 23-nautical mile (approx) Round the Rocks race (around the island of St John) that runs from 26-29 March 2020.