The opening weekend of Burnham Week 2021 (28 August-4 September) got off to a cracking start.

In total 15 classes including a range of cruising yachts, local one-designs and dinghies, as well as gigs, stand up paddleboard, kayaks and canoes, supported this premier east coast regatta, making it one of the largest entries the regatta has seen for some years. It was also good to see the multihulls enjoying fast and furious racing for the MOCRA (Multihull Offshore Cruising & Racing Association) three-day, class national championship. 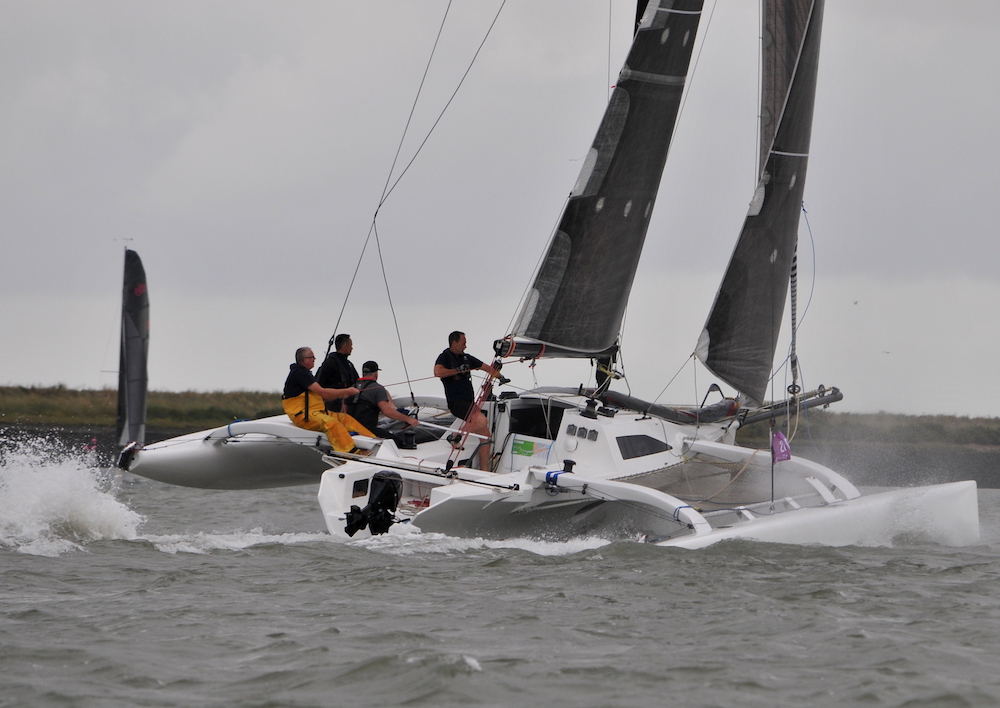 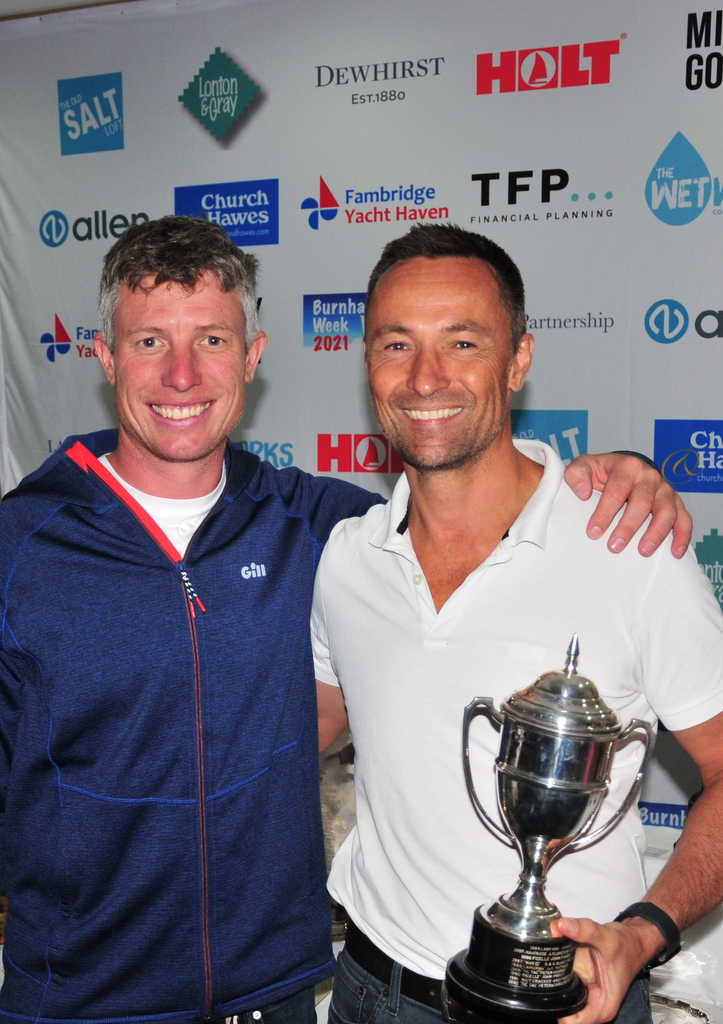 By far the fastest fleet, the MOCRA multihulls were first out the ‘starting blocks’ on Saturday morning and raced a course that took them to the mouth of River Crouch and back. It was six-hour-long day on the water with 15-mile course, which didn’t seem to phase visitors Julian Linton and team (Adrian Linton, Lloyd Turner and Ian Cuthberton) from Island YC Canvey Island. Sailing NRB a superfast F33 AXC this team revelled in the conditions reaching 25kts boat speed at times. They took a clean sweep of four race wins to secure the national championship title with a day to spare. Julian Linton commented: “It was our first major event and we are thrilled to have won. It was a fantastic two days of racing, in perfect conditions for our design. I would also like to say how grateful we are for the super helpful team at Burnham who really work hard to encourage newcomers to the fleet at Burnham Week. We’ll be back for sure and hopefully others will recognise what an amazing venue Burnham is for this sort of racing.”

Hot on their heels, although unable to make an impact in the processional conditions up and down the Crouch, was team Origami (Farrier 27) sailed by local hot-shots Nick Wood, Charlie Bird and Nick Geaves. A final race second place secured second place with an overall score of 11pts. Bird said the weekend was one of the best yet. “We had fun from start to finish and, although the wind direction and two-sail reaching limited our chances of making any sort of impact on NRB, it was all very close with great racing. The Caribbean themed rum party with turbo-charged cocktails on Saturday night was legendary and, to be honest, probably didn’t help our chances on the water either!’

Phillip Harbott and his team on Mantra (Aphrodite OOD 101) started the weekend well by clinching the Watson Cup from John Saunders and his six-strong team on Jeannie (Elan 31). Fresh from his second place on day one however, Saunders and team Jeannie took the top spot on the Sunday and won the Thalassa Trophy from Flynn Davies/Digger Harden aboard former Town Cup winner Jackal (J/92). Team Jeannie then went on to take a final race win on the last day, which was enough to secure the overall series. 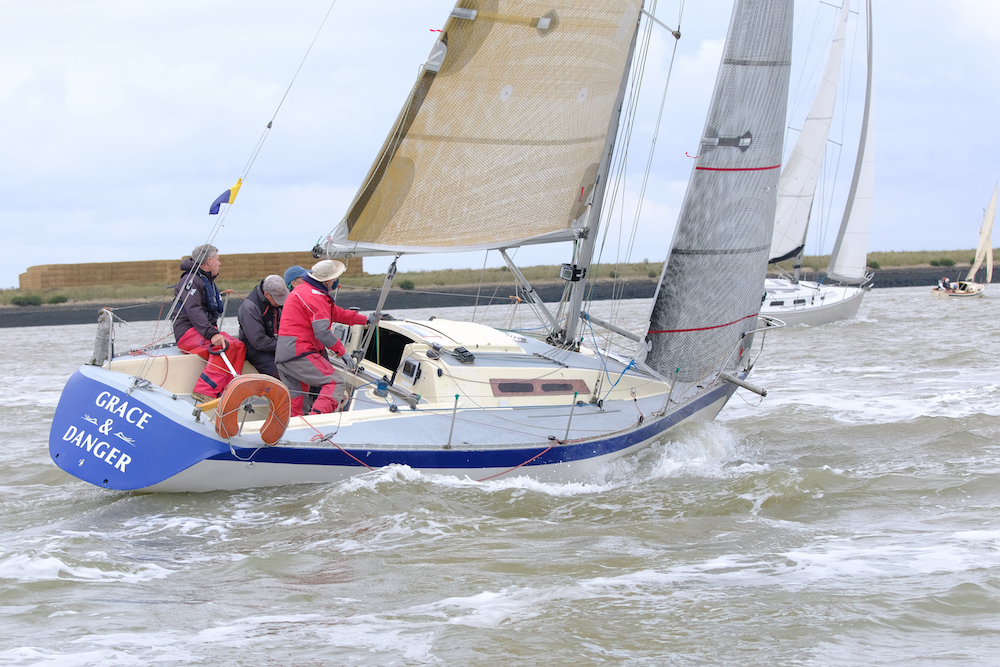 Stephen Gosling and team on Grace and Danger (Hustler SJ27) scored two firsts on the opening two days and, although they won the series overall, their win was by no means easy. Daryl Mylroie and team on Eclipse (Maxi 1000) sailed impressively and although they won the last race and finished on equal 5 points, Grace and Danger with two wins, was deemed the overall winner of class.

One of the most competitive fleets this weekend was undoubtedly Class 6 with its fine mix of interesting classes including a trio of Contessas (26,28 and a 32), and the super-speedy Andrew Wolstenholm-designed carbon-fibre Kite – Kate the Kite. Helmed by the legendary Keith Musto, and crewed by Law (joint owners), and Nick Peel, this snazzy, gaff-rigged, 21ft, lightweight flyer, really kept the fleet on its ‘toes’ but couldn’t quite outpace the MGC27 Ophelia sailed by Burnham SC members Richard Moore and Roger Tolhurst, who finished one point ahead with 4pts. 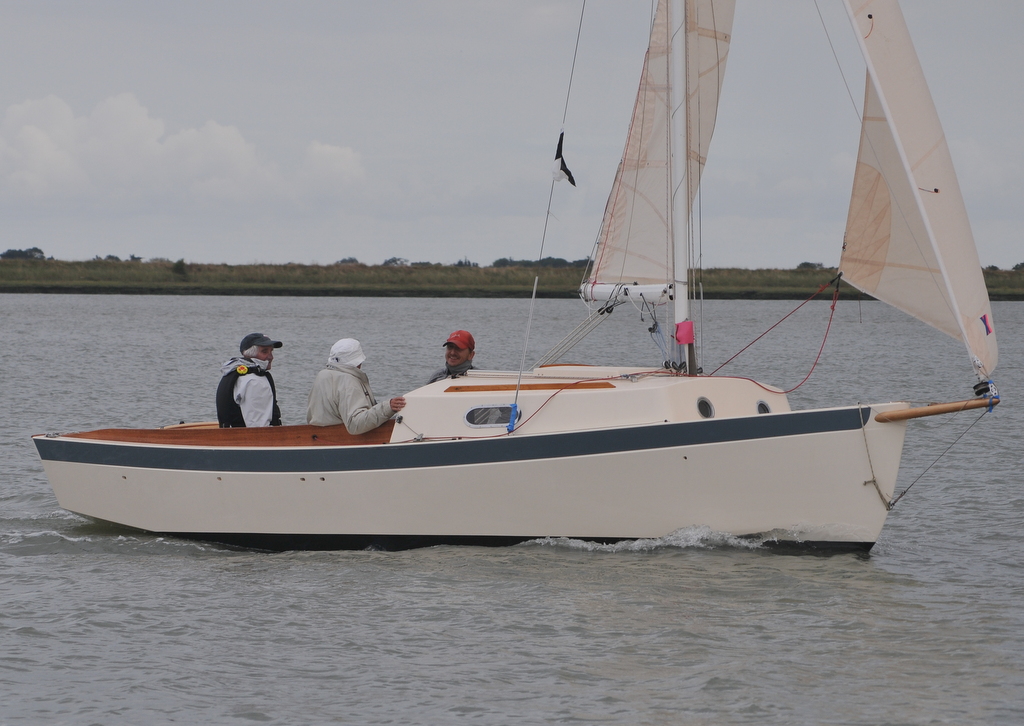 Keith Musto, who won an Olympic silver medal in the Flying Dutchman in 1964, is now 85 years old yet has lost none of his competitive prowess. As as he stepped ashore this afternoon Musto commented: “It was great to be out racing this weekend and above all it was fun. The Kite is a really good design and sails well despite the small sail area. We did suffer a bit with lack of sail area in light airs, and when under the lee of the shore, but generally it is a well-balanced boat and goes well. Actually to me it’s very much like sailing a GP14 dinghy in the old days. Sails in a very similar way but just has a cabin.”

Looking ahead to next weekend’s Town Cup, Musto concluded: “I am very much looking forward to taking the helm again next Saturday for the all-important Town Cup. Obviously it depends a bit on the weather, but hopefully we’ll be there.” 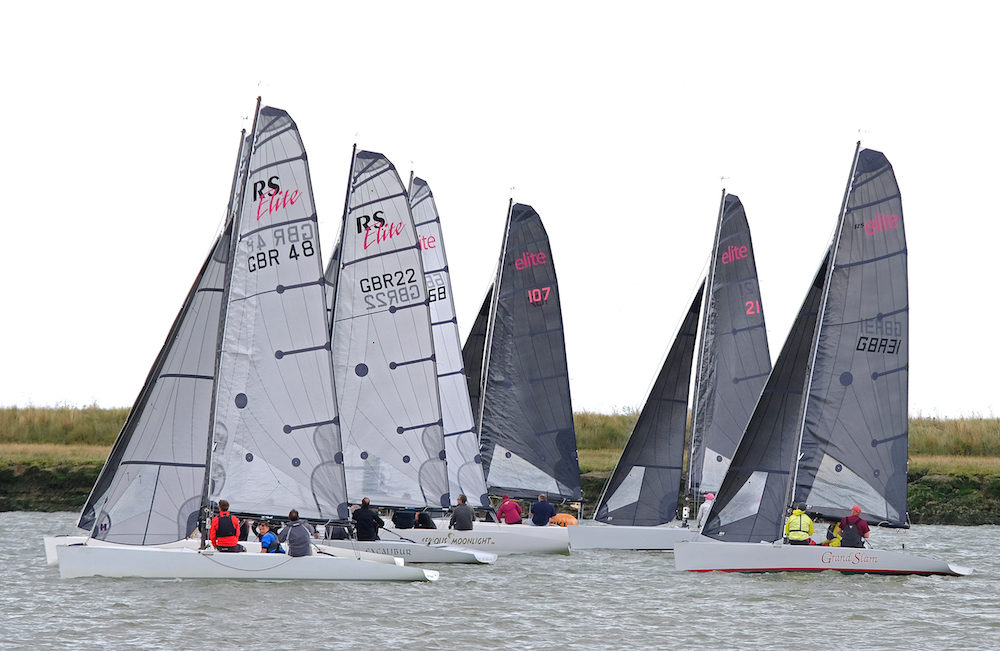 With an impressive 10 boats the Elite class enjoyed super-close racing and, although most were local home sailors from Royal Burnham YC, it was the visitors who took control of the pack with Paul Fisk from Emsworth SC and crewman Richard Tucker in Legs Eleven who scored five wins and overall victory, while Bill Blank and Richard Turner in Oink Squeal from EYC secured second.

Burnham Week wouldn’t be complete without local one-design keelboats not least because they consistently make up a large part of the overall fleet. They are also pretty, iconic, suitable for all sailing abilities and, most of all, extremely competitive.

The Royal Burnham One-Design, which turns 90 next year, mustered the largest local one-design fleet with eight boats and, as always, the fleet enjoyed close racing. Team Dallimore with Will Dallimore on the helm, were on top form this weekend on Mandarin but although they notched up two wins on the opening two days, a sixth on Monday’s final race was enough to relegate them to second behind Aquamarine. 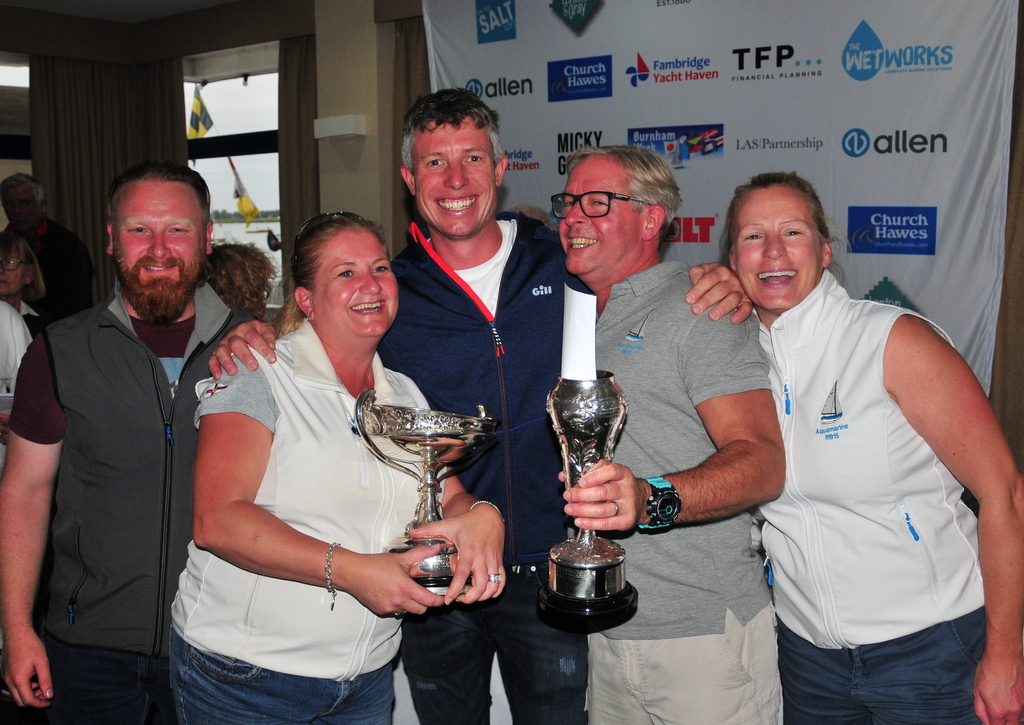 Angela Shephard with Matt Shephard and Sarah Hastwell at the front end won the final race and eventually finished the series one point ahead of team Dallimore on Mandarin.

The Bank Holiday Weekend Silver Tankard is the main competitive attraction in the Royal Corinthian One-Design fleet true to form, the long weekend produced some top class racing. It was also a weekend of consistency with the top five boats finishing in exactly the same order on the first two days. Ahead of the game however, were Justin Waples and his team of Steve and Lizzie Rands aboard Cormorant, who won overall with an impressive three win scoreline. Sue Law and John Newcombe in Coralie took second.

The elegant East Coast One-Designs made a welcome appearance this year and, although only two boats in the fleet, Widgeon (Ian Wilson/Dan Hally), and Wraith (Jerry Mecoy/Mark Ellis) made the most of the challenging conditions. However, it was Widgeon that always had the upper hand, finishing with two first places.

Although slightly down on numbers this year with just eight local boats, competition, as always in the Dragon fleet, was red hot.

Chip Cole with Nicola Hastwell and David Smith at the front end of Anarchy, enjoyed close racing throughout with Peter Marchant, Katie Cole, Noddy Norden, and Harriet Butler aboard Beauty and the Beast. However, going into the last race with one win apiece, team Beauty and the Beast sailed well, this time battling it out with husband and wife team Mark and Mandy Wade on Avalanche. A final win for Beauty and the Beast confirmed their overall win, with Avalanche second and Anarchy in third.

Although the Hunter 707 class always attracts a wide range of ages it is great to see the younger generation in particular, enjoying the delights of keelboat racing in these versatile boats. With two firsts and two seconds to count, BQ (Billie Quinlan/Clare Dallimore) won the series by two points from early series leaders James Dallimore, Rory Munro, Mike Champion, Charlie Matthews, and Robbie Hooper. 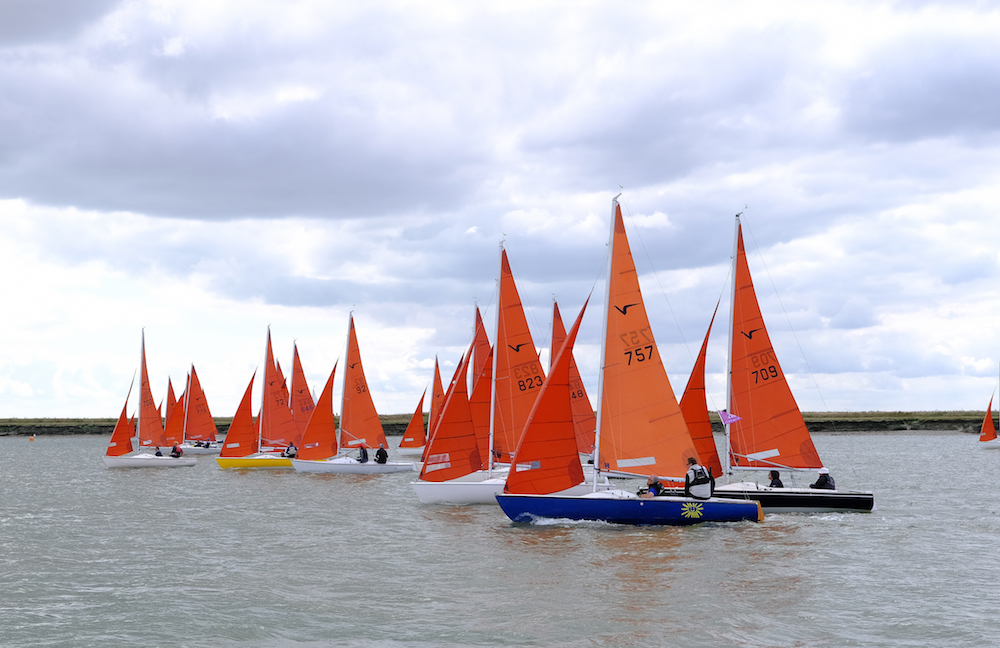 The Squib fleet never fails to support Burnham Week and with 24 boats on the startline this weekend, it was the largest class on the water. With some taking the opportunity to use the event as a warm up to the forthcoming national championship, it was also one of the most competitive for this weekend’s David Eagling Memorial Trophy and Brian Waples Memorial Trophy.

As is often the case in such competitive fleets, it was consistency that paid off. With six points overall counting two firsts and two seconds, Spoof (Micky Wright/Alex Porteous) took the overall win. Guy Fawkes (Phil Aspinall/Howie Enkel/Marion Aspinall) who were vying for top spot going into the final race, had to settle for third overall with a fifth place to count behind Jono Brown Chris Dunn, Portia Hutchings, Marion Aspinall aboard Squiggle. 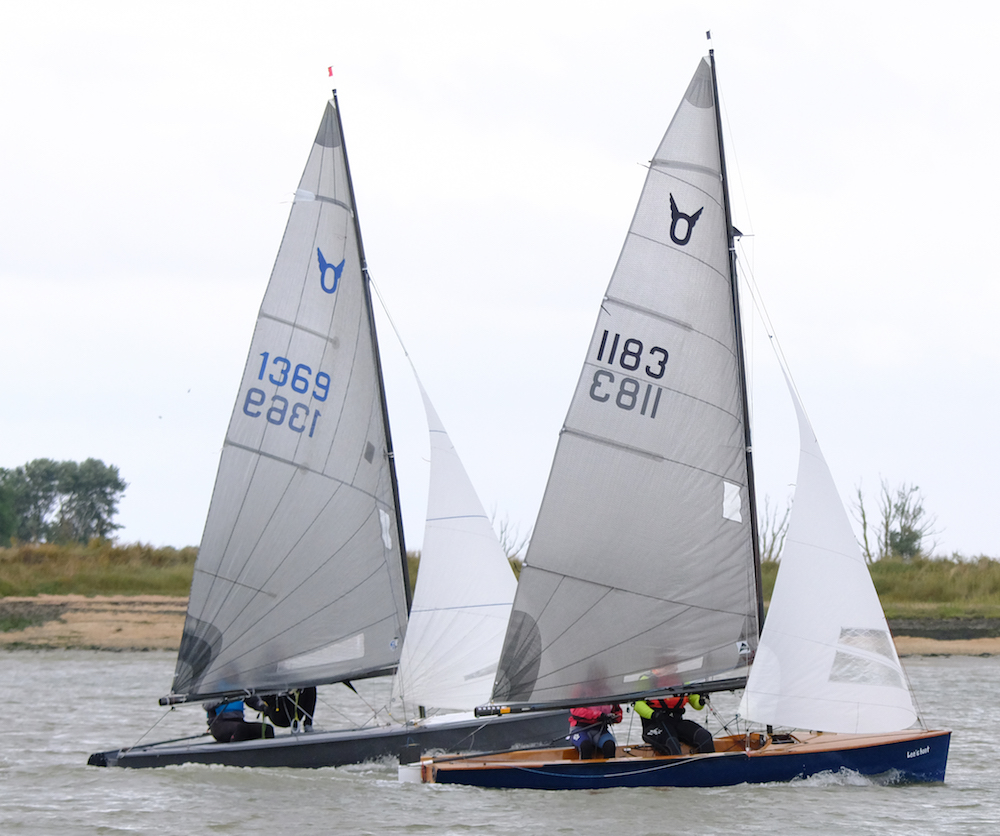 A total of 25 dinghies took part this weekend with fleet racing for the Osprey Phantom and a Dinghy Handicap class. The Phantoms turned out in force with 10 boats on the startline mainly from Creeksea SC, just up river from Burnham. However, once again it was a visitor – Bob Portway from Royal Harwich YC – who stole the show with four first places and a third to count (7pts). Graham Dale-Jones with one win, in the opening race, and 14pts overall, took second.

The Osprey fleet is a long-time supporter of Burnham Week and although numbers, with just five boats competing, were down slightly this year, the quality of the fleet was high with visitors turning out from as far away as Coniston and Kielder Water. Robert Shaw from Kielder Water, who is no stranger to sailing on the River Crouch, triumphed once again taking the event with a day to spare, and finishing three points ahead of Alex Mamwell from Coniston Water SC.

In the Fast Handicap fleet, Eamonn Browne in his Sprint 15 from Creeksea SC enjoyed a battle royal with Bryan Haynes from Royal Corinthian YC sailing an RS Aero 7. They both finished with 8pts overall but Browne took the trophy with a last race win.

Over the last five years or so, gig racing has become an all-time favourite at Burnham Week and today’s racing was, once again, a huge success. Also, for the first time Burnham Week Ltd (BWL) – the event organisers – expanded the event to include divisions for stand-up paddleboards, kayaks and river swimmers. This turned out to be welcome addition with spectators enjoying all the action just off the town quay after yacht racing finished for the day.

The Bank Holiday prizegiving took place after racing today with an array of silverware presented by Olympic 49er gold medallist Stu Bithell. Fresh from the recent Tokyo Olympics, Bithell honoured the crowds with his presence and was able to share some inspirational Olympic memories with Burnham Week competitors.

the final Saturday, which is Trophy Day. For classes that comply with regulations there is a chance to win the prestigious Town Cup. This is being run alongside the Houghton Cup (one of the oldest offshore races on the East Coast) in conjunction with EAORA (East Anglian Offshore Racing Association).

With nine race teams signed up including the likes of Richard Matthews’ flashy, new 52ft Oystercatcher XXXV, and Keith Musto on the helm of the Ant Law’s petite yet, fast carbon-fibre Kite, next weekend promises to offer plenty of excitement on the water.

On shore next Saturday spectators can enjoy the final day festivities including the annual Duck Race in aid of the Essex Air Ambulance. Tickets (or rather ducks) cost £1 and are available to purchase at all clubs and the White Hart pub. The event is scheduled to take place at 1100 from the pontoon at the Royal Corinthian YC.

In the evening prepare to be wowed by the grand Burnham Week firework spectacular, which blasts off at 2100.