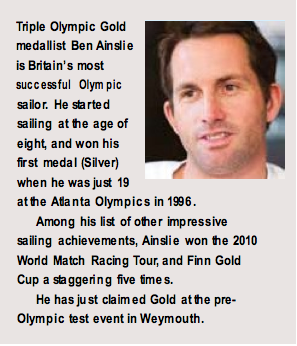 My amazing day has to be the crucial final day at the Sydney Olympics in 2000, winning my first Gold medal and turning the tables on Robert Scheidt, who beat me in the 1996 Olympics.
At this stage of the 2000 Olympics, I had a small lead of about two points, so either of us could have won Gold. Scheidt had had two bad races in the series and I’d only had one.
It meant that even if the first race of the day didn’t go well, I still had an opportunity to take him to the back of the fleet in the final race and win. So there was quite a lot to think about, which added a bit of tension to my exercise routine early that morning.
The first race of the day didn’t go well at all. I had a good start in the 12-knot north- easterly, but Scheidt led the race and I struggled to get to the favoured left-hand side of the course. I knew I had to get into the top six or seven. I was 8th at the final top mark and just pulled through to 5th at the finish, which was a great relief.
That left me with two options for the final race: either go out and win and hope Scheidt finished worse than 10th, or play it safe and take him out of the race. The fact was it didn’t matter where I finished in the last race; I just had to ensure he finished worse than 22nd.
After a delay for shifting wind, we finally got into a starting sequence and I pushed Scheidt to the unfavoured end of the line. Then about ten seconds before the start-gun, they postponed. This was terrible, not least because Scheidt now knew my game-plan.
Scheidt was much more prepared for my actions on the next start, so we spent about three minutes sailing round and round the committee boat. Scheidt then made a break down the line, with me on his transom, then, with about ten seconds to go, I was able to come into leeward and luff him head to wind.
We then set off at the back of the fleet on an amazing beat. We did something like 56 tacks. It was incredible because there was so much adrenalin flowing. On one tack I was holding on by my big toe and I remember thinking how disastrous it would be to miss the toe-strap and end up in the water.
I managed to hold him back as much as I could on the beat and not surprisingly, he was growling all sorts of things at me. As we got to the windward mark the leaders had reached the leeward mark. I set another trap for Scheidt, which delayed our mark rounding even more. He got fed up and rammed into me, so he could take advantage down the run.

It’s often said that I’m a different person on the water and can be aggressive and this picture is a good example. However, I see it more as competitive – I just want to win. It’s not a popularity contest when you’re racing!

My biggest mistake was assuming I had done enough. What I should have done was continue to make his life difficult. With just a beat and a run to go, Scheidt was still second to last and I was last. The wind then dropped and shifted, and while the lead group went up the right-hand side of the course, I followed Scheidt out to the left.
I was horrified and pretty helpless at this point, watching it all unfold as a wall of wind of 15-20 knots came in from the other side of Sydney Harbour. I was desperately trying to spot Scheidt as he headed down the last run. I think he was in 23rd, so all he needed to do was gain one position. He was just behind Stanley Tan from Singapore.
I remember shouting: ‘Come on Stanley, you can do it!’ Stanley sailed a fantastic last run and beat Scheidt across the line, which according to my calculations, meant Scheidt hadn’t quite made it.
To win on the water was satisfying but I knew Robert would protest about the incident at the windward mark, so nothing was certain. As I didn’t know what would happen at that stage, I couldn’t express my excitement on the water, although my reception at the dock when I was lifted out in my boat was amazing.
The protest lasted for about four hours and ended with Scheidt being disqualified from the race, which meant I had won the Gold. There was a huge sense of relief as my coach John Derbyshire and I walked out but by this time at 2200 there was no one around to celebrate. Or so we thought.
As we walked through the main gates of the Olympic arena there was a mass of photographers and well wishers there to meet us, including my parents, my sister, Paul Goodison who I’d been training with, and all the local supporters. That was fantastic as I really wasn’t expecting such a fanfare.